Introduction
From 26th – 28th September, the UNDP Georgia organized a Design Thinking Workshop in the Multimedia Education Centre (MEC), Tbilisi, focused on providing optimum access to 112 emergency services for people with disabilities, particularly for the hearing and speech impaired. To this end, the workshop brought together relevant stakeholders – people with disabilities, 112 Emergency Services specialists and civil society organizations – in the highly creative environment of the MEC.

The Creative Cooperative facilitated the workshop.

Day 1 : “Access to 112 Emergency Services” – Objectives of the Workshop
The workshop began with an overview by the Creative Cooperative, relating both the background to the workshop, and its main aims:

This general introduction was followed by an “Ice breaker” exercise. Such an exercise is designed as an informal means of introducing all the participants to each other, promoting “out of the box” creativity, and thus leading naturally into innovative group work. In this case, we chose the “Fabulous Beasts” exercise, where each of the participants was asked to draw a picture of herself/himself as a fabulous beast, and to list the supernatural powers which she/he would possess. All of the participants then presented their individual “beasts” to the whole group.

The participants were then introduced to the concept of Design Thinking, and “navigated” in advance through the design thinking process, on which they were about to embark.

Subsequently, the participants formed Groups. The basis for the groups was an optimum mix of the various stakeholders, including disabled people, if necessary with interpeters, 112 Emergency service representatives, and government agencies. In total, four groups were formed, ranging from 3 to 5 participants in size.

The first group exercise was the creation of “Value Ladders”. The Value Ladder is for the Creative Cooperative an essential part of the participatory creation and design process. If people with very diverse perspectives and experience are going to work together towards a shared goal, the must share common values with regard to their creative aim, in this case, the creation of an optimum 112 Emergency Response System for disabled people, in this case especially for the speech and hearing impaired.

The individual values of the individual team members with regard to optimum 112 Emergency Serviced delivery were combined and negotiated within the group until a final agreed “top” five values or criteria were attained. These values or criteria serve as a “touchstone” for the different groups to check back on the “authenticity” of their solutions during the creation process.

The values were as follows for the four groups: 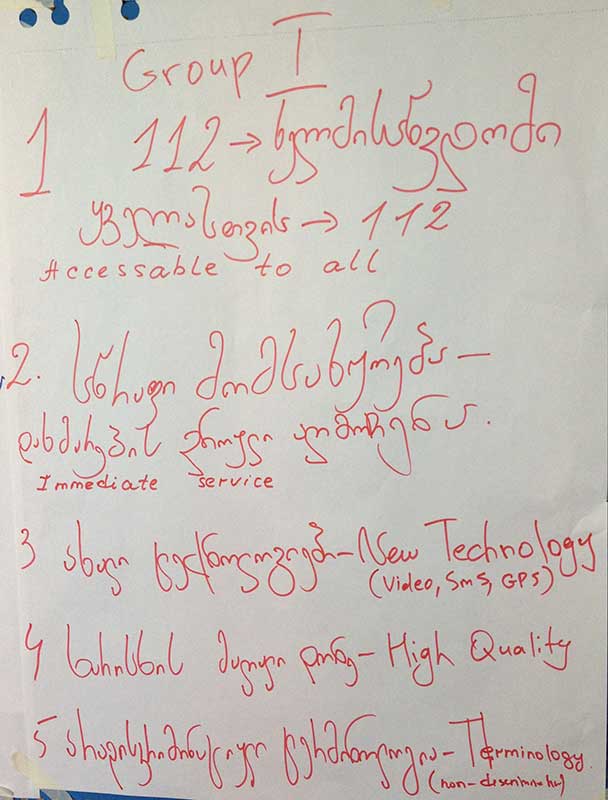 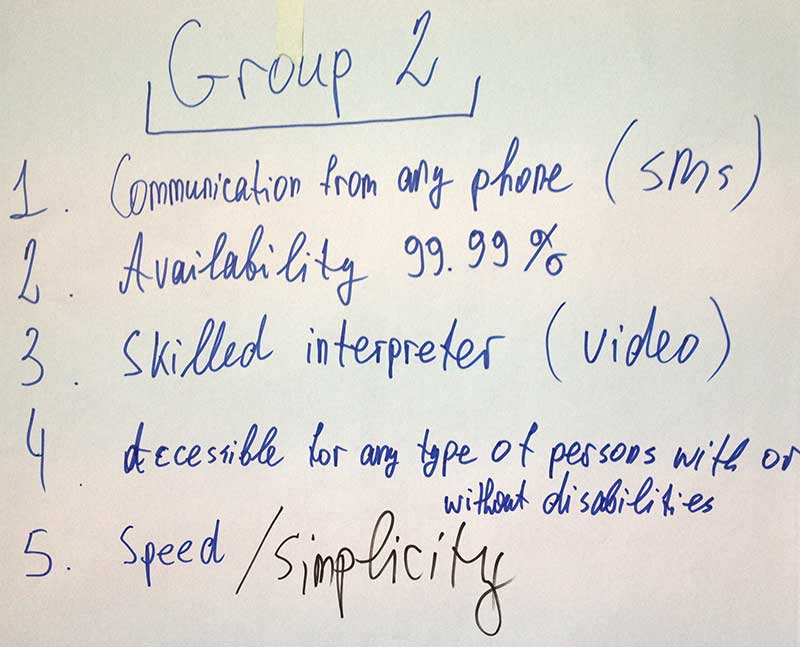 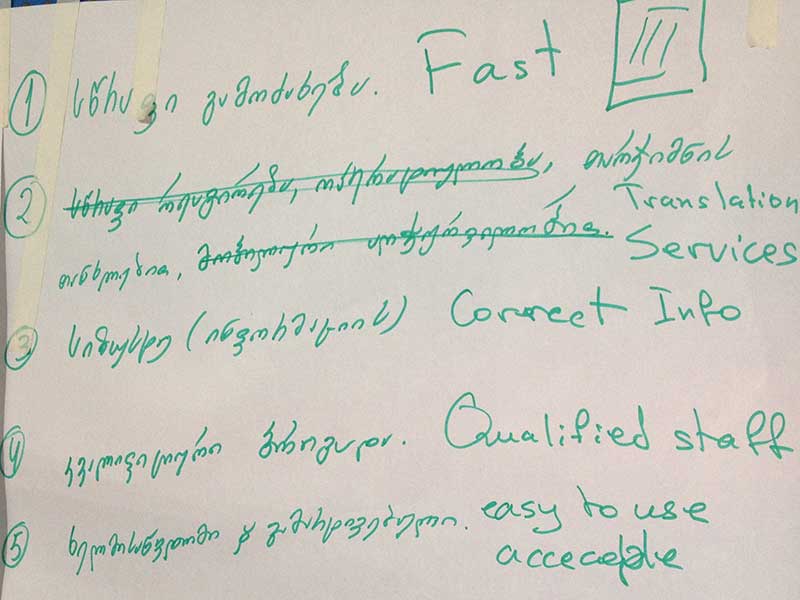 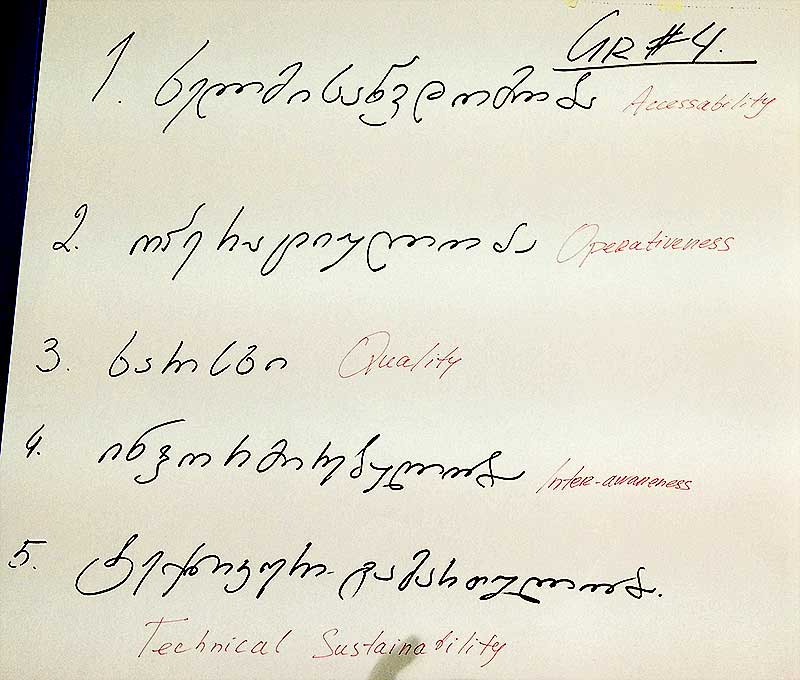 Following the “Value Ladder” exercise, the groups then moved on to building the “Persona” of a character, which they would subsequently use in creating the narrative. This persona embodies their own experience and will eventually form the basis for the creation of their 112 Emergency Service proposals.

The “Persona” describes all aspects, which could be relevant in the narrative from her or his life. This could include, for example:

Equipped with their values and persona, the groups were then asked to build a Narrative to map the present situation of a 112 Emergency Service response to a need for assistance for a speech or hearing impaired person. For this exercise, the groups made use of the wooden story puzzle pieces.

The ensuing stories were then presented on posters, displaying the potential inadequacies or weaknesses of the 112 Emergency Service response.

The first day ended with a presentation by Creative Cooperative of the present, new and emerging technologies which might be applied in the support of 112 Emergency Service response now and in the future:

It was emphasised that these technologies, however powerful, could also fail in certain situations. A really effective solution would be robust and flexible enough to master such a situation.

Day 2
The second day started with a presentation by Creative Cooperative of the nine steps within the 112 Emergency Services Call and Response process. Each of these steps represents a critical moment in the reponse. 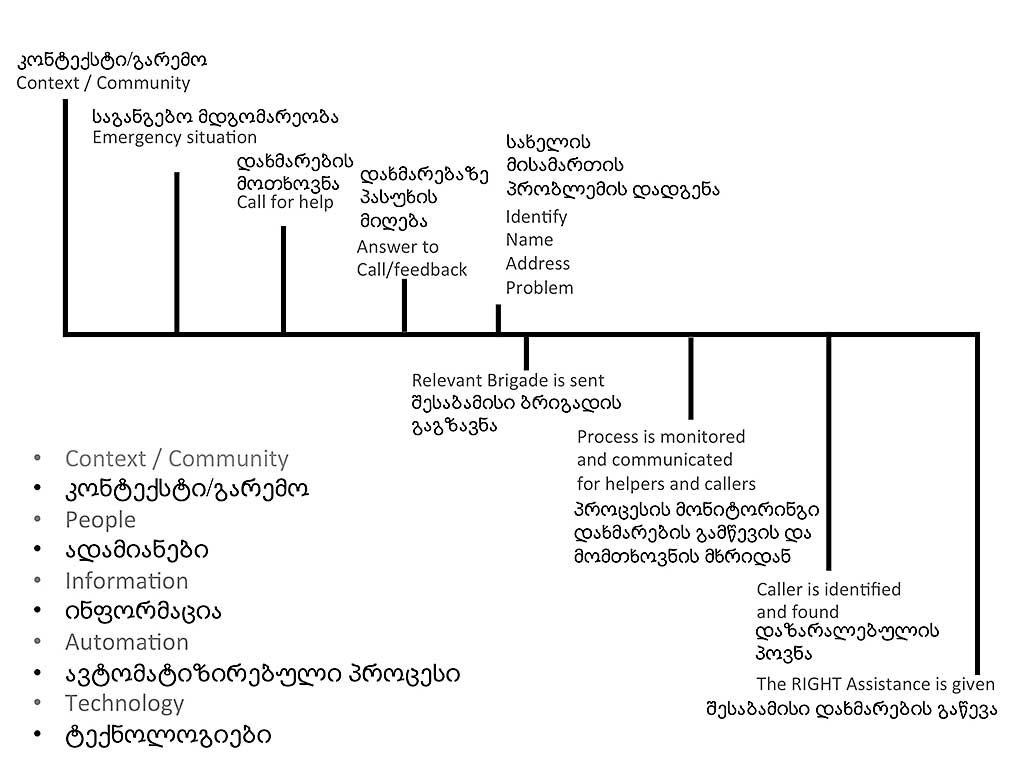 The time line of the Emergency Service answer and response process was also confirmed by the 112 experts among the participants.

Certain critical support parameters for this process were also considered:

The participants were then asked to create a Story Board around these nine steps of the 112 Emergency Service Response process, using their narrative of the present response situaton which they had constructed the day before, but this time reflecting the possibilities to create a more robust and optimized system, which would:

After the story boards had been created, the groups moved on to the final stage of their creative work: the making of the final presentation. In order to produce the presentation, the groups made use of all the available physical materials which had been provided for the workshop.

All the groups demonstrated their commitment by working into the evening hours on Saturday.

Day 3
For better understanding of the workshop process during the public presentation, Creative Cooperative also created a slide with a summary of all the critical values of the groups with regard to the optimum 112 Emergency Service provision: 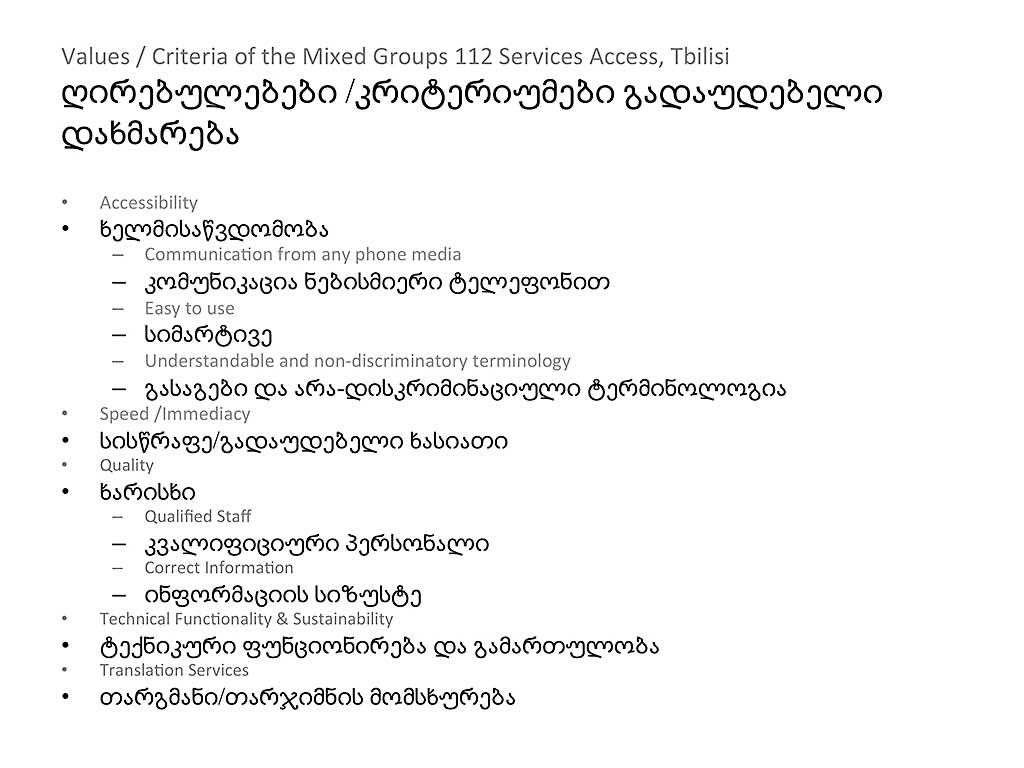 The final group presentations were made to representatives from the UNDP, the 112 Services, the Deaf Association, Government Agencies, and the general public. 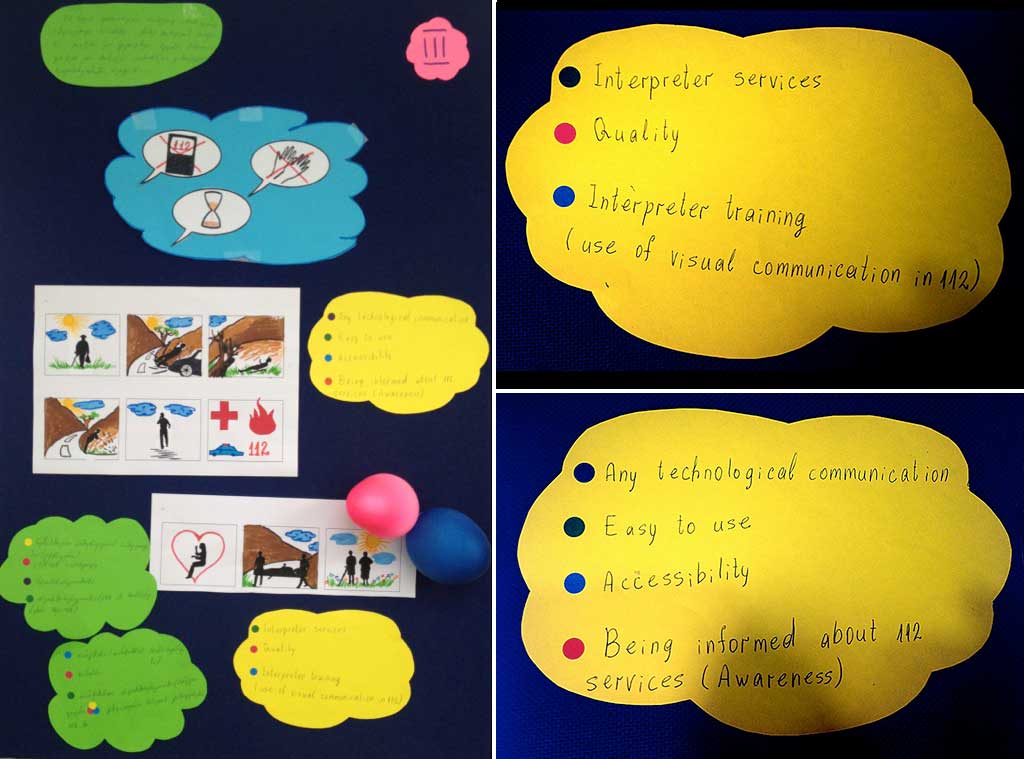 Impact of the Workshop and Implementation of the workshop results

On the basis of group work, and recommendations, it was possible rapidly to create a Revised Service Process and Delivery Model for access to, and the delivery of the 112 Emergency Services in Georgia.

The workshop continues to have a significant impact on the planning and delivery of Emergency Services in Georgia. The 112 service organisation, on a senior management and operational level, is working closely with the workshop participants and their representatives to optimise the service for people with disabilities. For example, sign language translators have been hired. In addition, the results of the workshop are being used in development plans to improve service delivery for other margianalised groups. 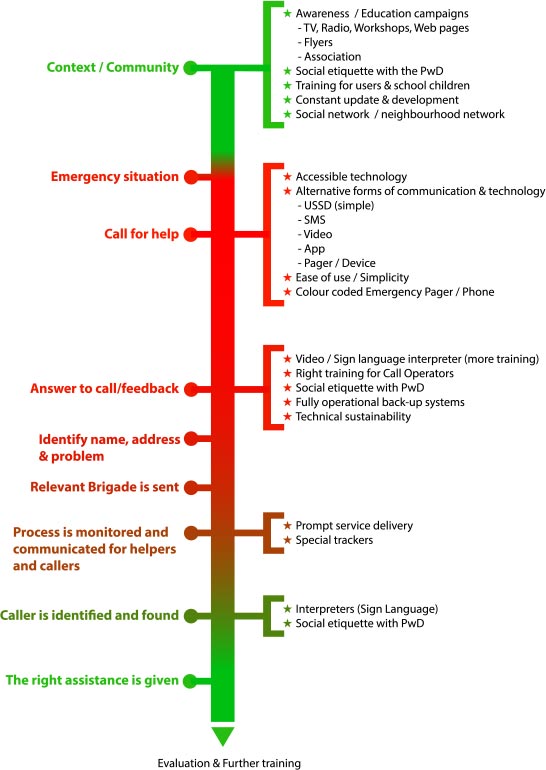 Some comments and observations