In the European Street Design Challenge, international teams of top young designers, in close cooperation with local residents and policy makers, compete to create innovative, “smart” urban community solutions and applications through the use of open and collaborative methodologies, together with digital tools and prototyping.

Across cultural, social and professional layers:

The Challenge so Far…
The Challenge, devised and run by Creative Cooperative, “kicked off” in Amsterdam in September 2010, and is already in its fifth year. In all Challenges to date, the international designers have produced highly innovative, practical yet poetic “smart” urban designs, which have demonstrated diverse cultural perspectives together with acute awareness of the need to create socially inclusive urban solutions with shared identity and ownership. International participation has been growing steadily, with teams from the UK, Netherlands, France, Austria, Italy, Finland, China, Russia and India to date.

Of all the districts within Seine-Saint-Denis in the eastern suburbs of Paris, which we have visited with the ESDC to date, the commune of Montreuil displays the greatest degree of “mixité” – a mixture of old French residential and industrial architecture, new apartment blocks, private and social housing, large parks and green areas, commercial and rural (agriculture, horticulture) development. The commune comprises several districts, each of which has its own identity. There is a marked difference between Bas (Lower) Montreuil and Haut (Higher) Montreuil. Bas Montreuil borders with the 20th arrondissement of Paris – therefore an attractive, slightly cheaper alternative to living in the city itself – and hosts several large-scale corporations and national organisations (UbiSoft, international banks, CGT, the trade union organisation). There is much attractive renovated housing in the area, and old factories, which have been renovated by modern enterprises. Nevertheless, the area still contains many old areas, in need of renovation, particularly to the north of the “rue de Paris”. 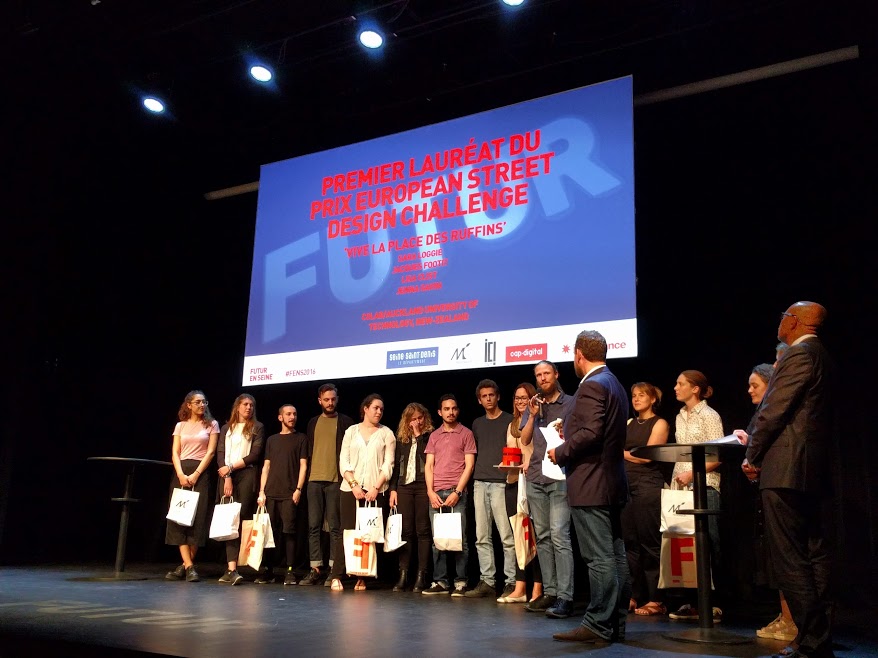 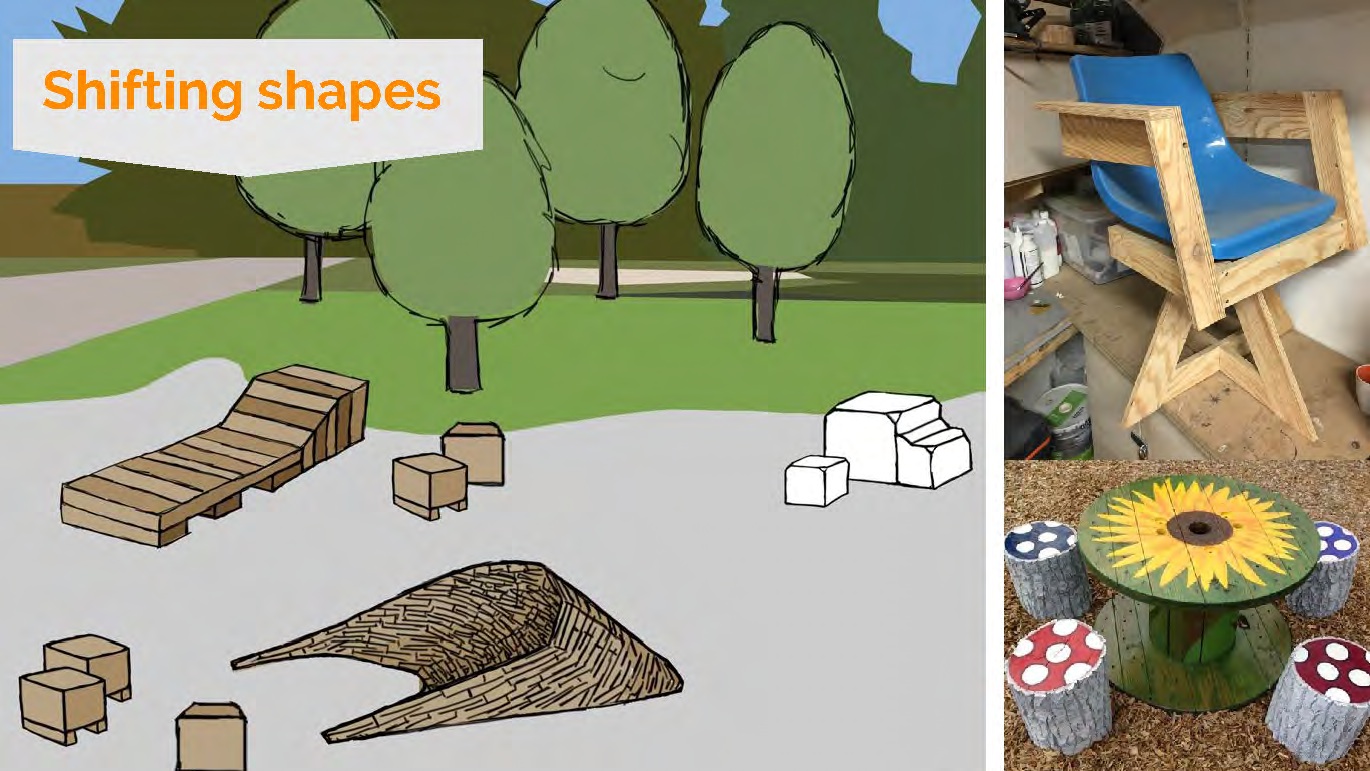 Within the framework of the Futur en Seine festival, the ESDC celebrated its fifth anniversary in Seine-Saint-Denis. In 2015, the ESDC ran from the 10th to 14th June under the heading “Digital and community in the new urban village”. We focused efforts on the commune of Bagnolet, in the eastern suburbs of Paris (5.2 km from the centre) and bordering the 20th arrondissement. Bagnolet has a rich industrial past, and a strong drive for sustainable future urban and cultural development. Particular attention was given to the “quartiers” of La Noue and Les Malassis, both areas with diverse multi-cultural communities, a desire for “green” park integration and community redevelopment ambitions. 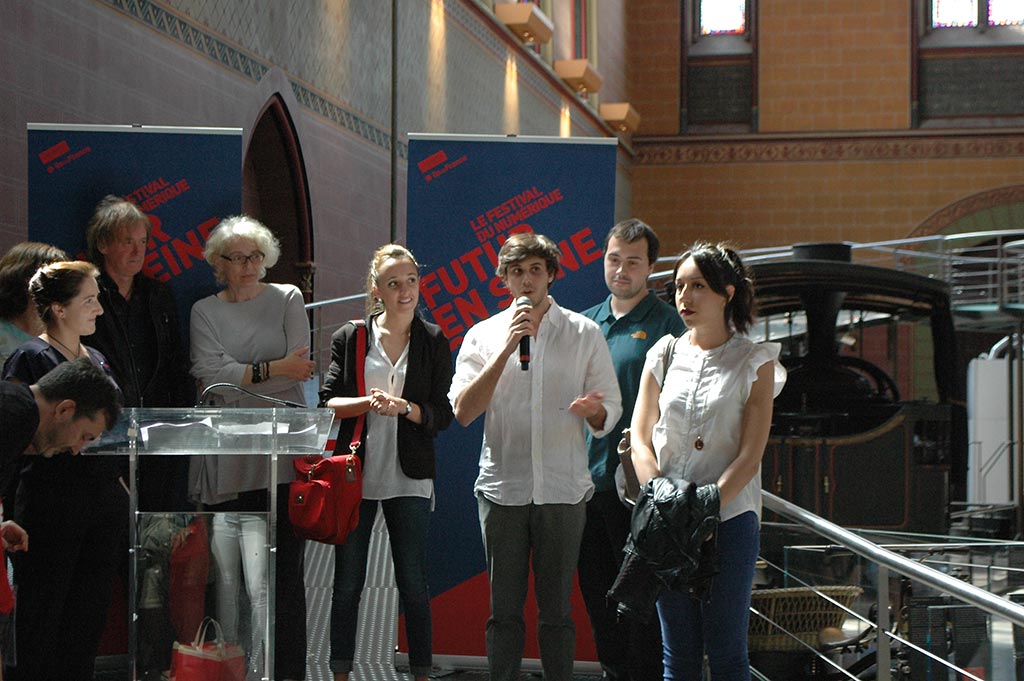 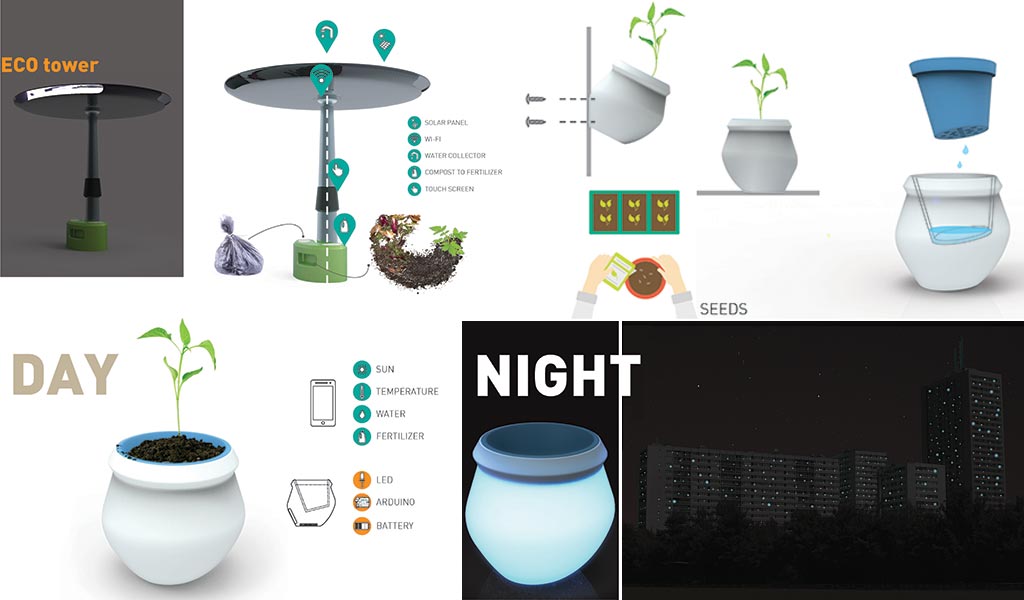 This summer, the European Street Design Challenge focused on Bondy, with its rich diversity of cultural, environmental, demographic and architectural perspectives. Bondy is a commune in a state of dynamic development. The provision of adequate and attractive housing for a rapidly expanding and diverse community is a priority, in addition to cultural and social initiatives, aimed at promoting civic cohesion and wellbeing. Despite intensive and committed efforts by local government, Bondy remains a “Zone Humaine Sensible” (a sensitive, delicate and complex human area) due to such factors as its geographic position, history, diverse demography, and relative poverty. Questions such as community identity, empowerment, civic engagement and sense of belonging are complex and challenging

The challenge in Bondy was to create new and innovative connections across this diversity, in order to improve community cohesion and inclusion, creativity and quality of life.

The design proposals presented by the international teams after several days of intensive work were innovative and diverse, reflecting the complex nature of the challenge.  Against evaluation criteria such as innovative, scalable, authentic, socially cohesive, feasible and sustainable, the international panel of judges awarded the 1st prize, the Trophée du Conseil Général de Seine-Seine-Denis to the team from the National Design Instiute of India with “BonBondy”. Read more … 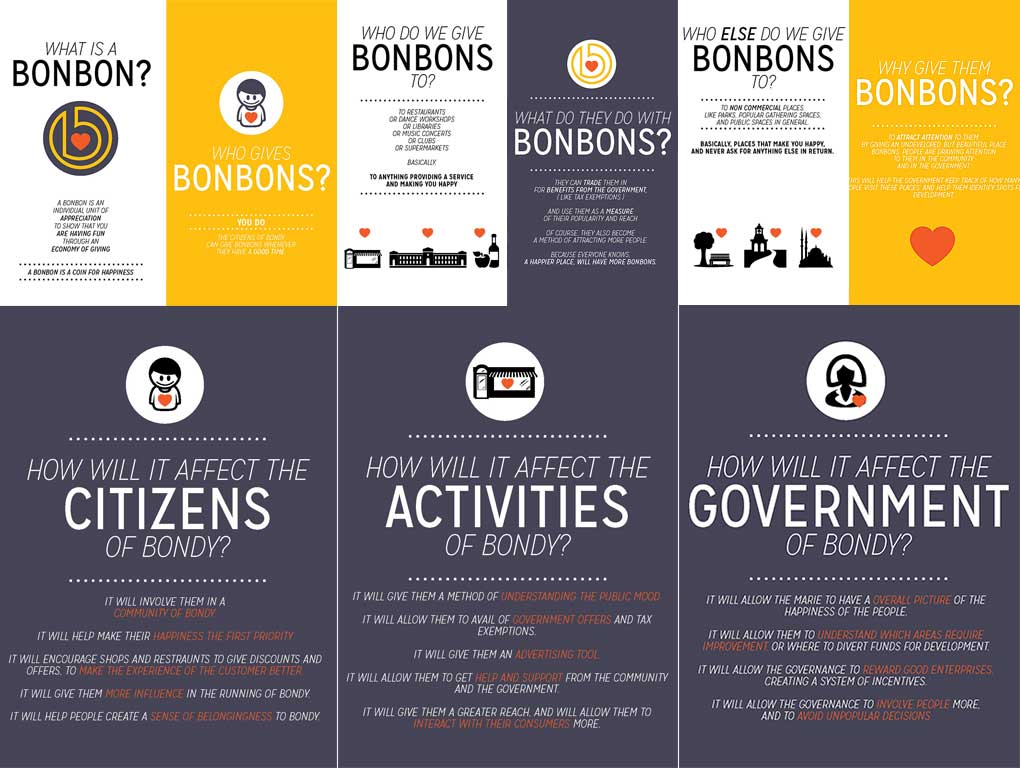 In the 2013 ESDC, we focused on the idea of an Expo for the Paris Region, which would both present wider visions of an urban future, whilst providing a practical legacy of sustainable urban regeneration for the local area. Participants were invited to create an international Expo concept for the area, then design a pavilion, installation, an application or space which would inspire, excite and transform on an economic, social or cultural level. Given the large number of international teams, we needed an area which could be viewed immediately before or during the event. The participants in the past have stressed the importance of the “physical” contact with the area, walking around, even talking to the local residents. Given the time available, we had to stay relatively close to the 104.  For that reason we decided to target the area, which we know well, focusing on the west side of La Plaine and over towards the Ourcq and Pantin. We then offered different perspectives for improving quality of life in this target area – from the regeneration of the former dense industrial space to the “opening” up of the Ourcq and its banks – for living, recreation, community building and better access…The resulting design solutions – applications, installations, spaces – could then “exhibit” innovative different perspectives for revitalising the area.

The 1st prize, the Trophée du Conseil Général de Seine-Seine-Denis was awarded to the L’Amour d’Orange team of designers from Utrecht. Read more… 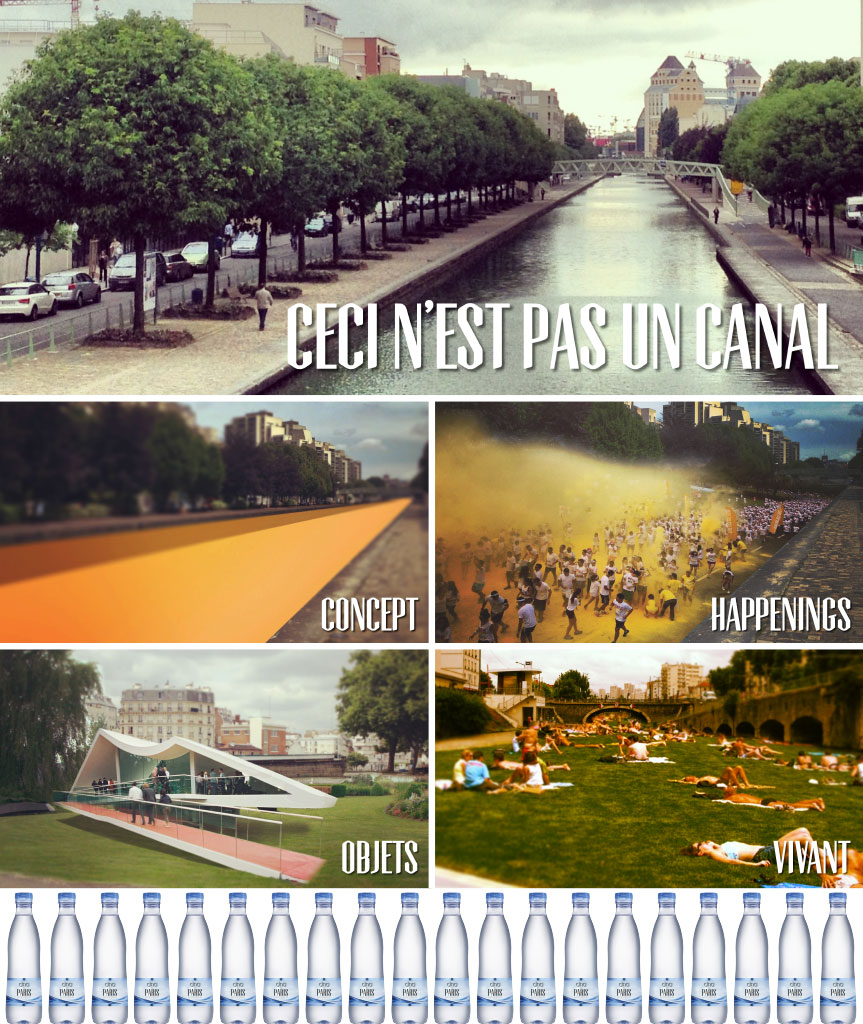 The ESDC ran a “Mini-Challenge” workshop at the Make It Center in Saint Petersburg in May 2013.

Two teams of young design and architecture professionals and students were set the task of redesigning the area around the Make It Center, an old, disused printing factory complex which lies on the Karpovka river and is surrounded by several universities, a botanical garden and historically rich residential areas with a mixed social demography.

The design prototypes present a strong reflection of the different approaches and concepts developed by the two groups:

Urban Peppers: An “all-embracing”, very contextual approach at a meta-level, encompassing the whole factory complex, its ecological setting, and its relationship to the surrounding area. The concept integrated interaction with the surrounding area and its inhabitants, a very open and accessible approach, with strong use of digital media for communication. A strongly aesthetic and “green” design of the landscape also included pointers towards the historic heritage of the sight.

Design Garden: A more micro-oriented approach, with a focus on one building which integrates recreation for the whole family with opportunities for creative collaboration under one roof. 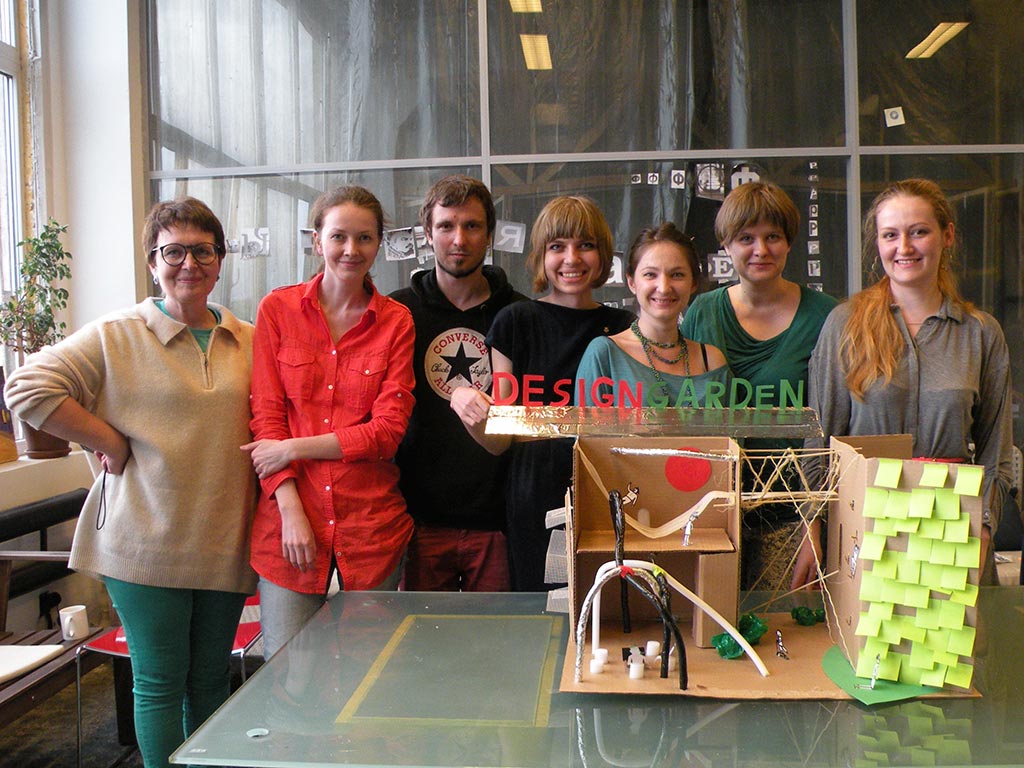 In 2016, the Campus de Condorcet, the largest university centre for the Humanities in Europe, will open its doors for students and researchers in Saint-Denis La Plaine. The aim of the 2012 European Design Challenge was to connect the highly diverse urban community around the planned new Condorcet Campus on a digital and physical level in order to promote “civicism”, citizen participation, civic and cultural awareness, shared responsibility, entrepreneurship and sustainability.

Specific issues for the Challenge in this area included: 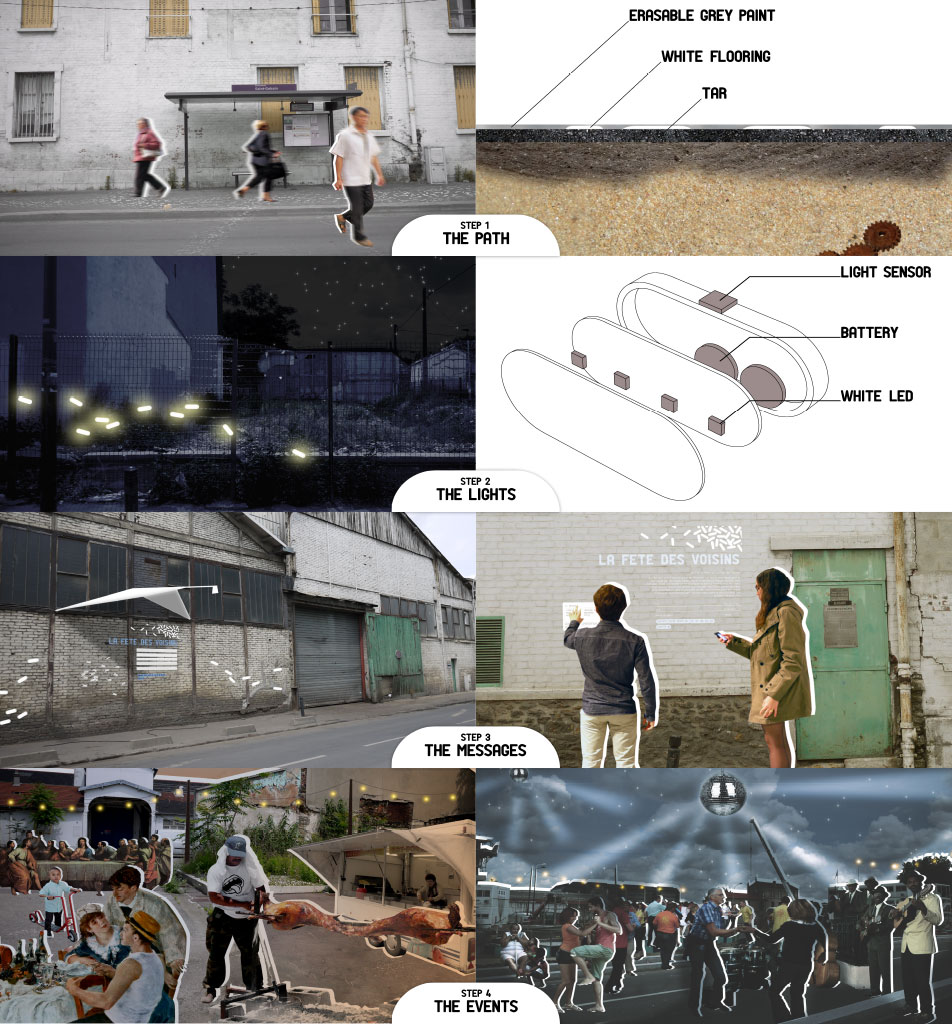 In Paris, as in other major cities, urban designers, architects, politicians, creatives and citizens increasingly face the challenge of finding solutions that create a sense of ‘connectedness’ and shared identity between the expanding new suburbs and the old, historic city centre. For Futur en Seine, a “border” area linking the city of Paris and the Seine-Saint-Denis “banlieue” was predefined as the target area for redevelopment by young, international designer teams. The challenge was indeed ambitious – to design a “gateway” or “bridge” from the suburbs to the city centre and vice versa, which is natural, aesthetically balanced and inclusive.

The area that was chosen to be ‘redesigned’ was in the commune of Pantin in the Seine-Saint-Denis (93) department. One of the most densely populated municipalities in Europe, bordering on the inner ring road (périphérique) on the northeastern side of Paris, Pantin has shared the same fate as many of its neighbouring communities, as its identity and social infrastructure have been eroded over the years. This presents an additional challenge : to reinforce not only common identity between the city and the suburbs but also within the suburbs themselves. The Ourcq with its origins in the city’s Villette basin before it passes through eleven communes in the suburbs of Seine-Saint-Denis, represents an excellent “organic” link, on which to build this common identity.

The 1st prize, the Trophée du Conseil Général de Seine-Seine-Denis was awarded to the team from Strate School of Design / Les Gobelins with “Rainbows”. Read more… 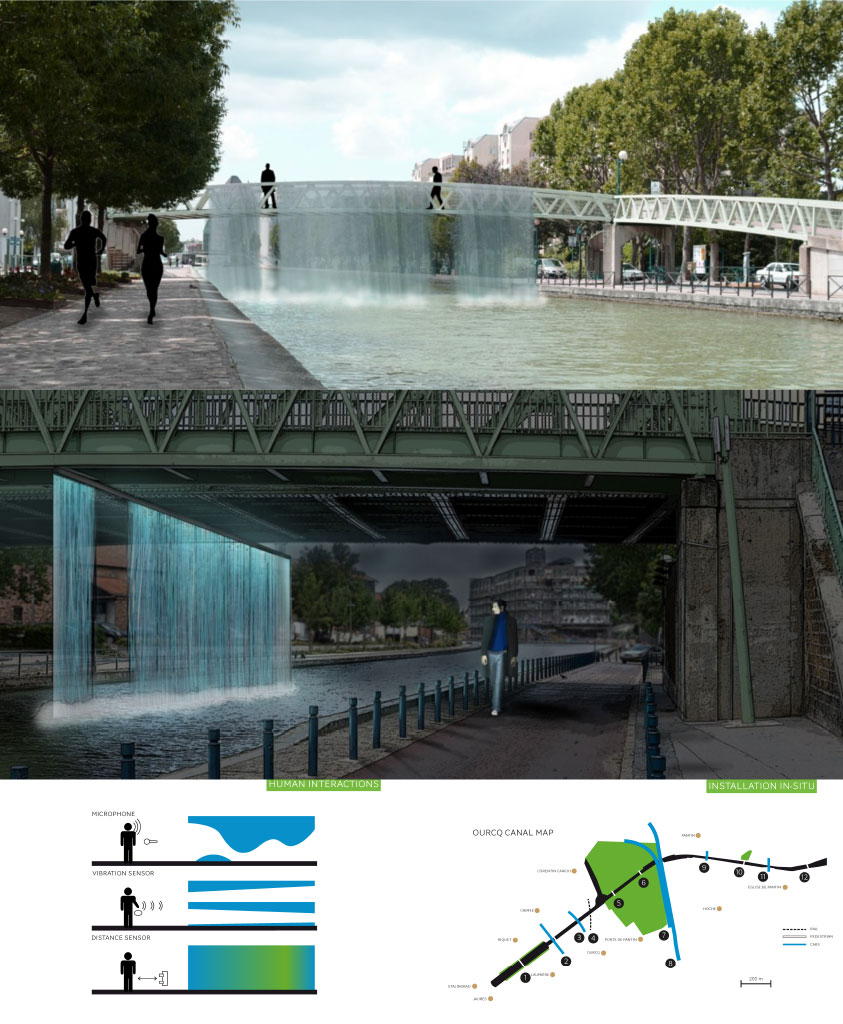 The European Street Design Challenge “kicked off” its international activities with an inter-festival collaborative event at PICNIC 2010 in Amsterdam, bringing together young French and Dutch designers for an ambitious urban design challenge. This exercise focused on the future, but was based very much on realities faced by the Amsterdam and Paris / Ile de France municipalities: to redesign and regenerate “challenging” areas of the city. In the case of Amsterdam, the “core” streets of the historic Red Light District, an area of strong identity, heritage, and charm, but also urban tension and notoriety, were selected for the challenge.

Six teams of design students and young professionals from Paris / Ile de France and the Netherlands were set the task of designing and prototyping a “street of the future” solution (e.g. interactive street furniture, smart communications or entertainment spaces, surfaces, or devices) over a period of three days in this historic urban melting-pot in Amsterdam. The team to produce the ‘winning” solution of excellence would receive the European Street Design Award.

The 1st prize was awarded to the team from Strate School of Design with ‘Behind the windows’. Read more… 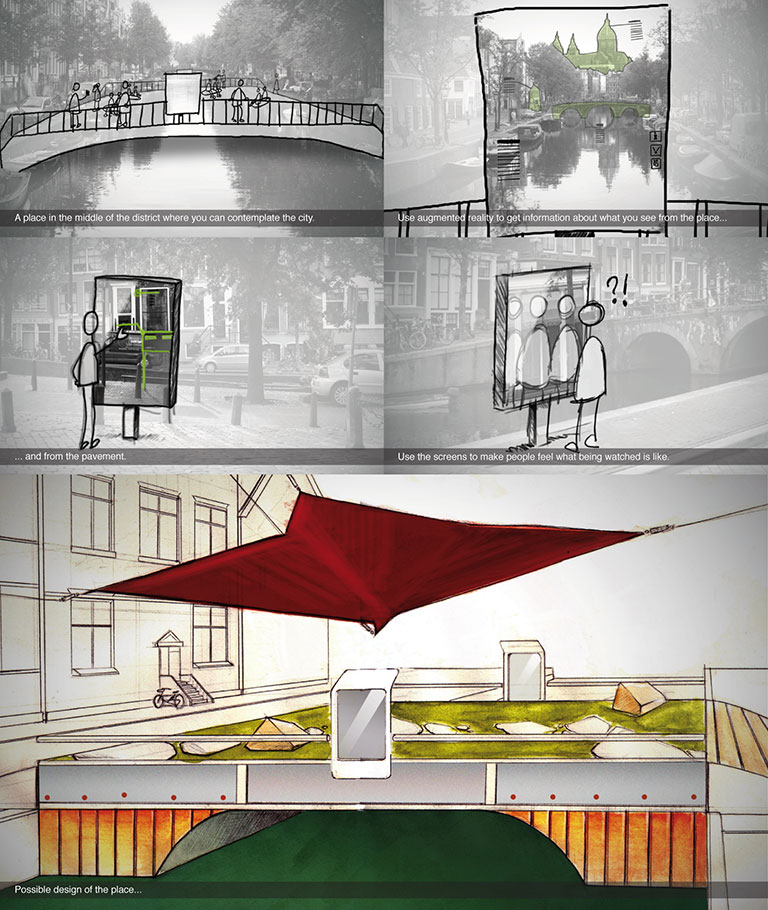